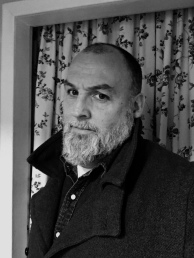 Craig Le Blanc’s art practice reveals a long-standing interest in vulnerability, bravado, ego, loss and façade. In 1996 he began an extended focus on masculinity, work that examined the burden of socially constructed ideals upon what it means to be male. In recent years Le Blanc has redirected this investigation to explore identity politics more broadly, using confessional narratives that both parody and celebrate the perpetual reshaping of subjectivity as seen in his 2016 series She Loves Me. He Loves Me Not.

Le Blanc’s works negotiate the tension between protective veneer and blatant exposure. He creates robust and structured forms that mirror the gendered stereotypes they allude to such as aggressivity, virility, competitiveness, while simultaneously inverting those assumptions.

Known for craftsmanship and execution, he employs many mediums and technologies in the search for the appropriate creative solution. He has worked within post-secondary design education for two decades, exposing him to methodologies that forever influence his artwork.

In the mid-nineties he studied painting and sculpture at the Nova Scotia College of Art and Design until a transformative period at École nationale supérieure des Beaux-Arts in Paris. This time, aligned with peers and the direct influence of Vincent Barré, Annette Messager and Christian Boltanski, altered Le Blanc’s perspective toward art making leading him to generate work wrapped in concept and gender. Le Blanc later received an MFA in Computational Media Design from the University of Calgary.

Le Blanc has found success in the public art realm, creating three large scale pieces from 2010-2016, one of which (Henri 2010) won an Americans for the Arts/Public Art Network Year in Review award for 2011.

He has works in several private, corporate and municipal collections.